There was a cold northerly wind blowing on the day but more sunny than expected for this 40 mile ride to Powis Castle. Anne, Yavuz and I left BC joining Kay and Jonathan at Churchstoke and Beryl later just outside Welshpool. 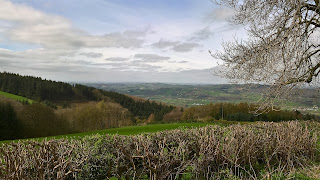 From Churchstoke we took a route through Priest Weston, Rorrington, Marton, Leighton via a steep climb up Long Mountain and down into Welshpool. The views from the top were great even though the clouds made it difficult to pick out the mountains in the distance. Just off the High Street in Welshpool is a driveway to Powis Castle through an ornate gateway where we met Stephen enjoying his lunch in the sun. 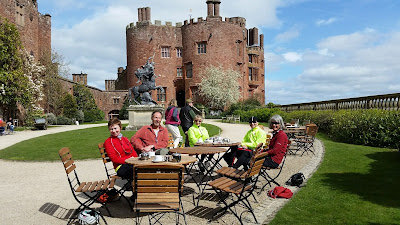 We met Paul, Maxine, Huw and John at the castle café where we had tea and cakes in the sunshine. 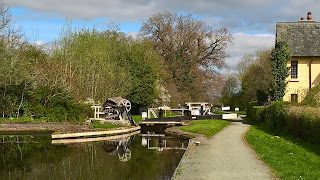 The route back for some was along the Montgomery Canal giving respite from the climbing we had all managed to do earlier. When Paul said we’d have the wind behind us going back we jumped at the suggestion. The hill into Montgomery was one too many but we managed it although Anne was so pleased to have made it she forgot she had cleats and fell elegantly in a heap – no damage to her nor the bike! At this point Yavuz did suggest more tea and cake but I was still feeling my lunch so I declined. 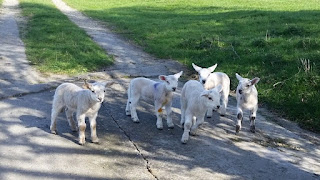 Finally, for all nature lovers we encountered lots of frolicking lambs, a family of partridge scattering as we cycled past them, a squirrel had a lucky escape, swans, ducks, a heron and unfortunately a dead cat in the canal.

Posted by Castle Cyclists at 20:00 No comments: